Pursuant to Section 4855(a) of the California Code of Regulations California Register of Historical Resources (Title 14, Chapter 11.5), the following nominations are scheduled for the August 5, 2022 State Historical Resources Commission (SHRC) quarterly meeting, taking place at 9:00 AM. This will be a hybrid meeting, taking place at California Natural Resources Headquarters Building Auditorium, 715 P Street, Sacramento, CA, 95814. The meeting will also be held online via Zoom. Dial-in access will also be available. Meeting notices and agendas will be posted ten days prior to the meeting date, and a Zoom link will be posted on approximately the same date to register for this meeting.

Register for the August 5, 2022 SHRC Meeting via Zoom (link pending)

The SHRC invites comments on the nominations from the public either in writing or at the scheduled public meeting. Copies of nominations are posted as PDF documents below. Written comments can be sent to: State Historical Resources Commission, P.O. Box 942896, Sacramento, CA 94296-0001.

Complete and official listing of nominated properties scheduled for hearing at the above mentioned SHRC Meeting can be found on the meeting agenda via the SHRC Meeting Schedule and Notices page. The nominations on this page may not reflect the most current properties listed on the agenda.

National Register of Historic Places nominations are considered drafts until listed by the Keeper.

California Register of Historic Resources nominations are considered drafts until listed or formally determined eligible for listing by the State Historical Resources Commission.

Calfornia Historical Landmarks and Points of Historical Interest are considered drafts until approved for listing by the State Historical Resources Commission and the Director of California State Parks.

Asilomar Conference Grounds Warnecke Historic District is located at the western edge of the City of Pacific Grove, overlooking Asilomar State Beach. The district consists of twenty-two buildings and associated landscape features designed by John Carl Warnecke & Associates after the State of California acquired the property in 1956. Originally a Young Women’s Christian Association (YWCA) camp designed by Julia Morgan, Asilomar’s initial stage of development was between 1913 and 1928. The Asilomar Conference Grounds Historic District was designated a National Historic Landmark (NHL) in 1987 for its association with YWCA history and as an important work of a Master Architect. Warnecke created a master plan in order to expand the original site and make it more automobile accessible, harmonizing with both the natural environment and Asilomar’s older buildings. The resulting distinct architectural context and 1957 to 1968 period of significance permit a new standalone nomination rather than amending the earlier nomination with additional documentation.

NORLINA (shipwreck and remains) is the submerged archaeological site of the steel-hulled tramp steamship NORLINA (1908-1926) located in Sonoma County. NORLINA—also known historically as HARFLEUR, GEORGIANA, and USS NORLINA—was built in 1908 in West Hartlepool, England, at the William Gray and Company shipyard as HARFLEUR. Between 1909 and 1926 the vessel served as a cargo steamship under several ownerships and nationalities including service during World War I under charter to the United States government. In August 1926, while enroute from San Francisco to Puget Sound with the Garland Steamship Corporation, NORLINA struck the jagged shoals south of Horseshoe Point and came to rest in Gerstle Cove near Salt Point. The steamship was a total loss and heavily salvaged before breaking up and sinking.

Pflueger, Timothy, L. House was built in the Italianate style in 1887 in the Dolores Heights neighborhood of San Francisco. Only the front façade of the two-story house is visible to the public. The building was altered circa 1903 by the addition of some Queen Anne features and extensions at the front and back of the building, in 1915 by modification of the rear extension, and in 1945 by a minor change in the first-floor front fenestration, all prior to or within the 1912 to 1946 period of significance. Master architect Timothy Pflueger (1892-1946) lived in the house throughout his productive life, having moved there as a child, and remained there until his death in 1946 at the height of his career. In the absence of any extant architectural studio or office, the house is the best property associated with Pflueger’s productive life, reflecting the time when he achieved significance.

New City of Mentalphysics is a 127 acre property near Joshua Tree, San Bernardino County, including 27 buildings, 2 sites, 2 structures, and 2 objects, mostly built between 1941 and 1961 and principally designed by Frank Lloyd Wright Jr., better known as Lloyd Wright. Employing a variety of oblique angles including diagonal grids and hexagons in the design of buildings and its overall site plan, this facility was designed as a spiritual retreat and community for Edwin John Dingle, also known as Ding Lei Mei, founder of the Science of Mentalphysics, a philosophy he developed while traveling and living in China in the early 20th Century. In addition to Wright Jr., some of the buildings were designed by significant Modernist builders and designers, including Orrin Kenneth Earl Jr. and Arturs Damrose, in the Organic style, a subset of Modern architecture that references its natural site through its formal elements, composition, and materials. 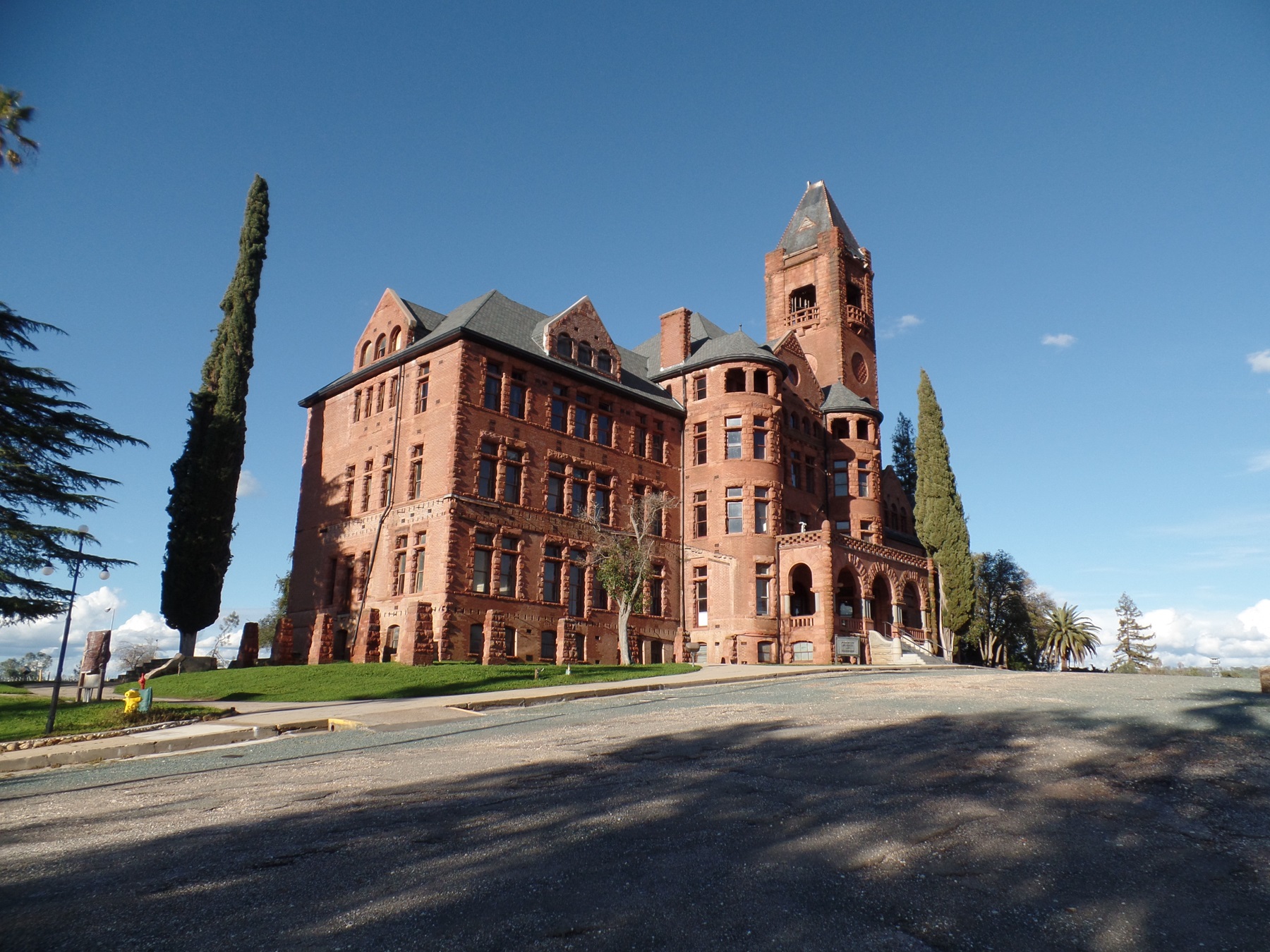 Preston School of Industry is a 320 acre site in Ione, Amador County, established as a juvenile correctiona facility founded in 1894. Consisting of 82 buildings and several contributing objects and structures, the most prominent building is the already National Register listed Preston Castle. The original facility is surrounded by dozens of residences, barracks, cottages, and other support and utility buildings constructed between the school's founding and the 1950s. Many master architects, including Anson Boyd, Dean & Dean, Alfred Eichler, and George McDougall, designed the school's buildings, and many of them were built by the inmates of the facility to support, expand, and modernize its operation.

United States Maritime Service Officers School is a district consisting of the remaining buildings & facilities associated with the officers' training facility established for the U.S. Merchant Marine and Maritime Service constructed during World War II on the island of Alameda. The district is significant for its role in training Merchant Marine officers during the Second World War and the Korean War, and their architecture, based on institutional examples of Second Bay Tradition and International Style architecture. In addition to the simple, rectangular barracks building, one contributor, the Glory of the Seas, was designed to resemble the prow of a Liberty Ship, intended to teach deck officers to use flag signals on a curved "flying bridge."

Properties nominated to the California Register of Historical Resources

Joshua Tree Futuro is a prefabricated single-story building of circular plan and oblate spheroid form designed by Finnish architect Matti Suuronen, intended to be adaptable, lightweight, and portable. The property is one of fewer than one hundred known to have been made worldwide, fewer than twenty known to exist in the United States, and one of only four in California. Despite the large-scale loss of interior amenities and relocation to a radically different setting than initially envisioned, this rare property type remains eligible for its retention of the essential character defining features—lightweight fiberglass shell and the circular-form interior space it defines, elevated metal support structure and legs, band of oval-form windows, and drop-down entry door. 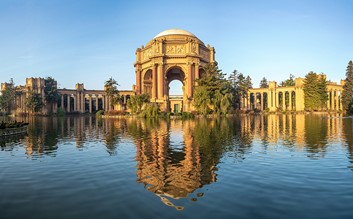 The Palace of Fine Arts consists of a building and four structures in a park in the Marina District in San Francisco. Originally conceived in 1913 for the Panama-Pacific International Exposition and completed in 1913, designed by architect Bernard Maybeck as a forgotten and overgrown Roman ruin. Intended as a temporary installation, the citizens of San Francisco engaged in heroic efforts to retain the Palace, the only surviving building of the 1915 exhibition. The Palace quickly became recognized as one of California's most beautiful buildings, despite its lack of function and temporary nature. A long-term project, planned in the 1950s and begun in the 1960s, reconstructed the Palace in its current permanent form, a project completed in 1974.

The next State Historical Resources Commission meeting is scheduled for Friday, August 5, 2022.  Nominations to be heard on the August 5, 2022 agenda will be posted after June 6, 2022.