The nominations below were reviewed by the State Historical Resources Commission during the year 2022. Scroll down to view subsequent actions by quarter. New actions are added to the end of this page after each quarterly State Historical Resources Commission meeting. Agendas from past meetings are downloadable in PDF format below on the right sidebar.

Royal Theater features a blend of modernistic design elements, which include an Art Moderne curved corner and smooth stucco wall surface, paired with Art Deco geometric design elements on the triangular-shaped ornate marquee. The 1940 theater was one of several owned by Arthur Shogo Fukuda, who was forced to sell the building before internment at the Jerome Relocation Center in Arkansas. As a property type located in the Japanese enclave of Guadalupe—owned, built, and managed by Japanese Americans for both their immediate community and their neighbors—the Royal Theater meets the Asian Americans and Pacific Islanders in California, 1850-1970 Multiple Property Submission registration requirements for property types associated with Community Serving Organizations.

Woman’s Club of Bakersfield is a Georgian Revival-style, brick-clad building constructed in 1921 and repaired in 1953, following the 1952 Bakersfield earthquake. During the early 1920s—a prosperous time for the oil and agricultural industries that dominated Bakersfield—downtown Bakersfield reflected its wealth in its buildings. In 1952, the Bakersfield earthquake devastated the unreinforced masonry building. Unlike many other building owners, the members of the Woman’s Club elected to repair rather than raze the clubhouse. As a result, the building remains an early and intact example of a purpose-built women’s clubhouse from the 1920s and one of the few pre-war, pre-earthquake commercial buildings in Bakersfield. The Woman’s Club of Bakersfield is also the oldest, extant purpose-built clubhouse in Bakersfield and the earliest known example of a building designed by Charles H. Biggar in California.

Fullerton Union High School Auditorium was designed by master architect Carleton M. Winslow, Sr., an early California proponent of Spanish-styled architecture, in 1930. The elaborately decorated Spanish Colonial Revival building includes Italian Florentine, Renaissance Revival, Mission, Greek and Moorish elements on both the interior and exterior. Situated on the west wall of the auditorium is the Pastoral California mural, dedicated in 1934. The mural was painted over in 1939 and restored in 1997, after the property had been listed on the National Register in 1993 as the Louis E. Plummer Auditorium. The vibrant 15- by 80-foot, 4-inch mural is sheltered by an expansive covered arched walkway that runs the length of the auditorium. Funded by the Federal Works of Art Project, the fresco depicts California’s mission and rancho periods from 1776 to 1846 in a series of scenes that feature animals, games, and historical Mexican and Spanish figures from early California and Orange County.

Santiago Orange Growers Association Packing House, built in 1918, is a contributor in the National Register-listed Old Towne Orange Historic District. The packing house represents a once-vital local industry and an increasingly rare property type in the region. Santiago Orange Growers Association operated the largest packing house in Orange in 1918 and was the world’s largest shipper of exclusively oranges after 1929. Two ancillary buildings, built by the association in approximately 1920, were relocated in 2018 to accommodate construction of a new dormitory building. The ancillary buildings remain on the packing house property, retain their historic orientation, and maintain their clear visual relationship with each other, the railroad tracks, N. Cypress Street, and the packing house. The construction of the new residence hall therefore altered without destroying the historic spatial relationships that characterize the property.

Freestone Store is a circa 1872 one- and two-story commercial building located along the Bohemian Highway in Freestone, a rural community that has a long agricultural and recreational history in Sonoma County. The property played an integral role in the development of Freestone as an important hub for transportation and commerce in Sonoma County and northern California. Despite “1876” in wooden numbers added to the façade after 1970, primary resources corroborate a construction date of circa 1872 as the building was in place prior to construction of the railroad, which began operations in 1876. Freestone Store continued to be of commercial significance in the community through the counterculture movement of the 1960s. A concerted effort to rehabilitate and restore Freestone’s historic buildings to help support the town’s economy in 1972 led to the town being identified in 1974 as Sonoma County’s first locally designated historic district.

Carthay Neighborhoods includes three subdivisions established between 1922 and 1933, including Carthay Center, Fairfax Park, and Olympic-Beverly Plaza. They tangibly express the practical application of key City Beautiful ideas to residential developments during a period of intense growth in Los Angeles, and constitute an excellent collection of Period Revival residential architecture, including both single-family and multi-family residences.

Glide Memorial Church is a 1931 church and adjacent Apartment Building located in San Francisco's Tenderloin neighborhood. It was designed by James W. Plachek and built in the Mediterranean Revival style. The property is part of the existing Tenderloin Historic District. The property is nominated for its association with Social History as a women's residence in the 1930s-1950s and early LGBTQ history in the 1960s, Black and Asian ethnic heritage in the 1960s, and as a significant example of the work of architect James W. Plachek. The period of significance begins in 1931 with completion of the church, and ends in 1970.

Morris Kight House, located in Los Angeles, is a Craftsman bungalow constructed in 1911. The building is significant for its association with Los Angeles gay activist Morris Kight, who moved into the house in 1967. Kight's home became a meeting place and organizing center associated with the creation of multiple gay rights organizations and events, includng the Los Angeles chapter of the Gay Liberation Front, the Christopher Street West parade, and the Gay Community Services Center (now the Los Angeles LGBT Center.)

Hogan House, a Mid-Century Modern/Post and Beam style residence in the Laurel Canyon neighborhood of Los Angeles, was constructed in 1964 for television actor Jack Hogan. The topography of the area is characterized by steep hills, canyons, and winding roads. Laurel Canyon first became popular among members of the Hollywood film industry in the 1920s. Like most of Los Angeles, Laurel Canyon experienced another wave of residential development during the post-World War II era, characterized by the construction of modern homes that took advantage of new technologies and methods of engineering that enabled construction in such steeply sloped sites. Designed by notable local architect Douglas Rucker, best known for his work in and around Malibu, Hogan House appears to be one of few buildings designed by Rucker in the City of Los Angeles.

Old Farmdale School, constructed in 1894, is located on the campus of El Sereno Middle School in northeastern Los Angeles. Local architects Bradbeer and Ferris designed the 1,870 square foot Queen Anne style schoolhouse to serve the small, rural community of Farmdale, later known as El Sereno. A four-sided open bell tower with arched openings contains the building’s original cast metal bell. Historically set within a nineteenth century agrarian community, the schoolhouse occupies a small portion of a 27.7-acre middle school campus in a major city. Significant for its association with the founding years of Los Angeles’ public educational system, the building is an excellent and rare remaining example of a late-nineteenth century rural schoolhouse in Los Angeles—one of only three extant examples of the property type in the city.

St. Francis Wood Historic District is a residence park on the western face of Mount Davidson in San Francisco, on land that gradually slopes down from east to west. Olmsted Brothers landscape architects created a plan that responds to this topography. The district is associated with the establishment of designed and planned residence parks in streetcar suburbs in San Francisco after the 1906 earthquake and fire, and lots in St. Francis Wood went on the market in 1912. The district is also significant as the representative work of a significant collection of architects and landscape architects within a unified plan. St. Francis Wood is representative of the overall planning components of a residence park, possessing a significant concentration, linkage, and continuity of landscaped streets and boulevards, community parks and other open spaces, and architect-designed single-family residences of varying architectural styles, united historically and aesthetically by a cohesive plan and built in a relatively compressed period of physical development.

Patsiata Historic District, encompassing approximately 186 square miles in Inyo County’s southern Owens Valley, includes Patsiata (Owens Lake) and the many shorelines formed as lake levels fluctuated over the past 14,000 years. The traditional cultural property is associated with the creation of the world and the lifeways and history of the Nüümü and Newe (Owens Valley Paiute and Western Shoshone Indigenous People). A unique cultural landscape that includes many features related to creation and to the continued maintenance and restoration of balance in the world, the district is also a physical, place-based manifestation of the United States’ genocidal policies toward the Indigenous inhabitants of the American West and the colonization of Indigenous homelands in what became the United States of America. The district’s significance includes its focus for passing on culture and history to younger generations, and for sharing ecologically relevant traditional knowledge with agencies responsible for land stewardship.

Robert Gray is a 117 foot hydrographic research vessel completed in 1936 for the US Army Corps of Engineers, intended originally for hydrographic surveys of the Columbia River. Completed in 1936 and first designated Heavy Tug LT666, the Robert Gray featured a new method of hybrid propulsion similar to that used on submarines, and engaged in operations including supply of the Aleutian Island chain during the Second World War. After the war, the vessel was overhauled by the Army Corps of Engineers in San Francisco and transferred to the United States Geological Survey in 1970. Its dual diesel-electric propulsion with specially designed propeller and hull are significant for their eingineering, intended for slow-speed operation best suited for hydrographic survey work.

Timby House is a 1940 Modern Ranch style home designed by William Wurster in collaboration with landscape architect Thomas Church, located in San Carlos, San Mateo County. An addition constructed in 1950 was designed by Theodore Bernardi, Wurster's business partner. The one-and-two-story wood framed residence has a "bi-nuclear" plan intended to avoid damaging the oak trees adjacent to the home, integrating the natural setting into a flat-roofed Modernist interpretation of a California ranch home.

United States Maritime Service Officers School is a district consisting of the remaining buildings associated with the officers' training facility established for the U.S. Merchant Marine and Maritime Service constructed during World War II on the island of Alameda. The buildings are significant for their role in training Merchant Marine officers during the Second World War and the Korean War, and their architecture, based on institutional examples of Second Bay Tradition and International Style architecture. In addition to the simple, rectangular barracks building, one contributor, the Glory of the Seas, was designed to resemble the prow of a Liberty Ship, intended to teach deck officers to use flag signals on a curved "flying bridge." 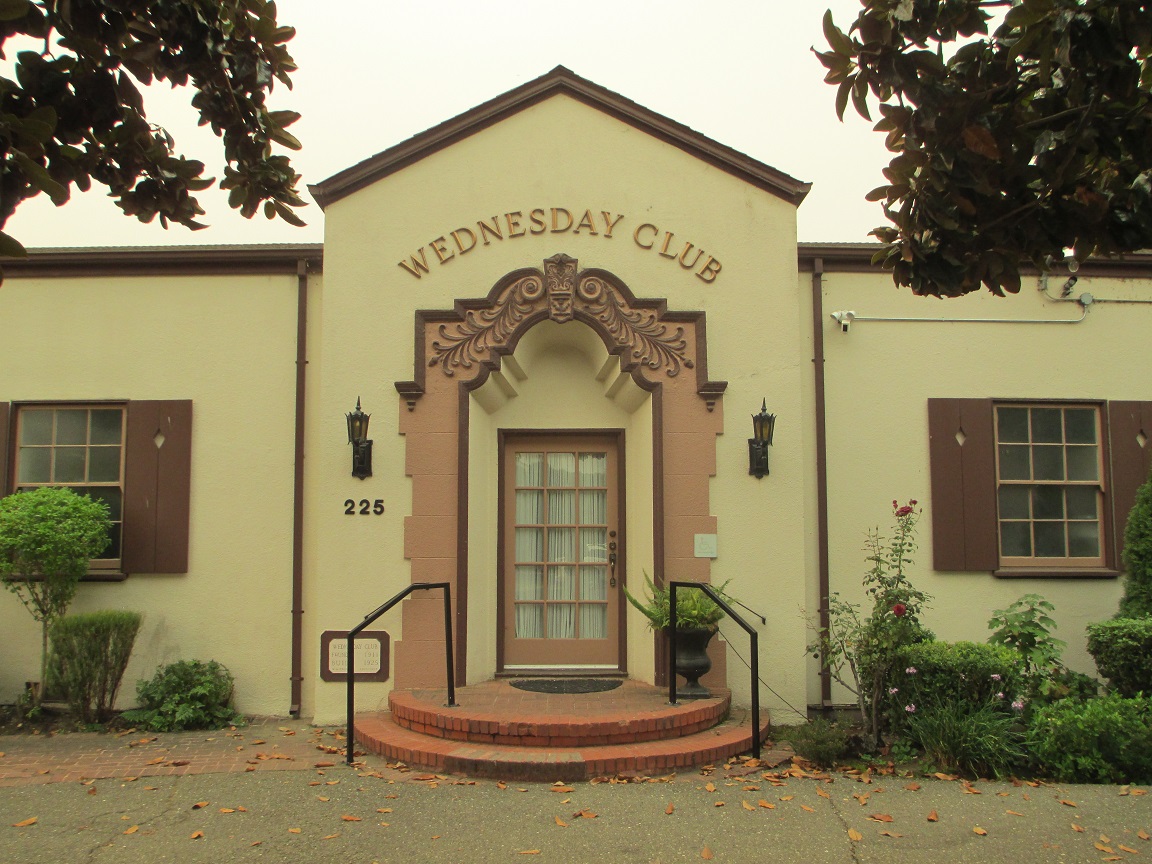 Wednesday Club of Suisun is a wood-framed, stucco-clad Mediterranean Revival style building located in Suisun, Solano County. Completed in 1925 to replace an earlier 1911 clubhouse, the Wednesday Club was designed by San Francisco master architect William Henry Crim, Jr., and served as a clubhouse and event center for this locally influential women's organization.

Past agendas of State Historical Resources Commission meetings and workshops are posted on the Past Agendas page.