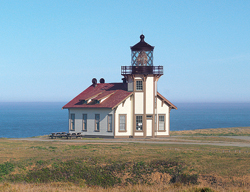 Construction began on the Point Cabrillo Light Station in 1908 and the lens was illuminated for the first time in 1909. The light tower houses a third-order, British-built Fresnel lens. The light station was listed on the National Register in 1991. 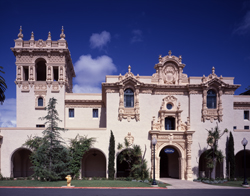 Originally built in 1915 as the Foreign Arts Building, the House of Hospitality was given its new name in 1935 and is well-known for its Spanish-Renaissance style. Because it was designed for the Panama-California Exposition of that year, it was not built to last and therefore was reconstructed in 1997. The larger Balboa Park, of which the House of Hospitality is a part, was designed a National Historic Landmark in 1977. 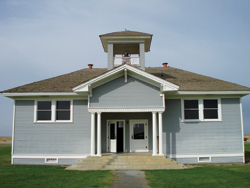 In August 1908 Colonel Allen Allensworth and for other settlers established a town founded, financed and governed by African Americans. Their dream of developing an abundant and thriving community stemmed directly from a strong belief in programs that allowed blacks to help themselves create better lives, and they believed strongly in the power of education. For this reason, the schoolhouse was and is a prominent feature of the town, which is now a state historic park. The Allensworth Historic District was listed on the National Register in 1972.