In 1988 the California Office of Historic Preservation published Five Views, a statewide survey of properties associated with ethnic communities in California; the chapter titles included: American Indians, Black Americans, Chinese Americans, Japanese Americans, and Mexican Americans. The study was intended to be a tool for researchers, schools, government agencies, historic preservation organizations, and ethnic communities. In their foreword to the publication, Henry Agonia, Director of California State Parks, and Kathryn Gualtieri, State Historic Preservation Officer, said, “. . . it is important to remember that this report is only a beginning, one step in an ongoing process.” Five Views is significant because it was the first statewide survey of its type in the state and it raised public awareness.

After a two-year collaborative process with representatives of California's Latino communities, the Office of Historic Preservation in 2015 published Latinos in Twentieth Century California, a historic context that recognizes the contributions of Latinos to the more recent history of California. Five Views was an early effort to make Californians and the nation aware of Latino history and some of the properties associated with that history. The objective of this current project is to update and expand the information provided twenty-five years ago, and nominate properties to the National Register of Historic Places. The Latinos in Twentieth Century California Multiple Property Documentation Form (MPDF) provides the framework for the nomination of associated properties in the contexts of Making a Nation, Making a Life, Making a Living, and Making a Democracy. Properties address the themes of labor, economic justice, struggles for social and political inclusion, arts, politics, and media. They are representative of the geographic and regional divisions of the state, and attempt to balance the urban and rural legacies of Latinos in California.

This study is timely for several reasons. In June 2011, Secretary of the Interior Ken Salazar announced the establishment of a National Park Service (NPS) American Latino Theme Study as part of the Park Service’s new American Latino Heritage Initiative. The study consists of a core essay and highlights four broad themes: 1) Making the Nation; 2) Making a Life; 3) Making a Living; and 4) Making a Democracy. The California effort, which focuses on Latinos in California during the twentieth century, is both geographically and temporally narrower than the NPS approach.

Another reason that this project is timely is that various projections anticipated that by 2014 Hispanics would represent the largest ethnic group in California. The State Department of Finance predicted that by 2020, Hispanics would account for 40.7 percent of the population. Obviously, identifying and evaluating historic properties associated with communities and cultures that represent about 40 percent of the population is an important task.

Here are some other efforts and organizations, in California and nationwide, working to preserve and recognize Latino history: 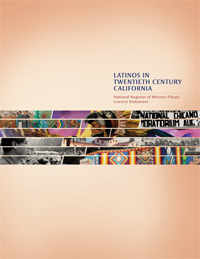 The Office of Historic Preservation is pleased to present the statewide historic resources context statement: Latinos in Twentieth Century California. This is an illustrated version of the Multiple Property Documentation Form that was approved by the National Park Service in April 2015. This form allows for properties that fall within this context to more easily be nominated for listing on the National Register of Historic Places. For more information on preparing a nomination under this context, contact our Registration Unit.