The Climate Heritage Network (CHN) announces the release of their 2022-2024 Action Plan, Empowering People to Imagine and Realize Climate Resilient Futures Through Culture - From Arts to Heritage. The Action Plan is designed to shape change by connecting cultural voices to each other and partners across sectors to transform climate policy, planning, and action at all levels by embedding culture and heritage into strategies to realize low-carbon, just and fair, climate resilient living. In conjunction with the Action Plan's release, the CHN updated their website as well, providing communities and citizens with information and actionable goals to address climate challenges.

On October 7, 2020, Governor Newsom signed an executive order that aligns California with 38 other nations in conserving 30% of open lands and coastal waters by the year 2030. The 30 by 30 initiative launches a series of strategies aimed to protect California's unique biodiversity and move the state further along the path to climate resiliency in the age of global warming. “Once again, California is taking on the mantle of global climate leadership and advancing bold strategies to fight climate change,” said Governor Newsom.

Read further on this page to learn about additional actions currently underway in California to address the challenges of climate change, and protect our state's treasured natural and cultural heritage.

In September 2018, the Global Climate Action Summit was held at multiple venues throughout San Francisco, with various additional climate related events held around the city. This international event brought together leaders and people from around the globe and from a variety of public and private sectors to make a united call for climate action. The Office of Historic Preservation, along with many national and international partners, facilitated an officially affiliated session, Climate Heritage Mobilization. The Mobilization session continued an already building conversation around the intersection of culture, preservation, and climate change. One of the sessions goals was the introduction of the Cultural Resources Climate Change Task Force. Led by the California State Office of Historic Preservation, the Cultural Resources Climate Change Task Force, with participation of state agencies will create a Cultural Resources Climate Change Strategic Plan (Plan). The plan will include information as to how to consult with appropriate California Native American Tribes and the State Historic Preservation Officer in advance to protect cultural resources at-risk by developing non-traditional solutions to retain, and adapt or treat these resources, where possible.

Since its inception, monthly meetings are held to achieve the goals of the Cultural Resources Climate Change Task Force as presented in Safeguarding California:

Once the Gap Analysis is completed, our next step would be to hold public listening sessions to understand what is important to communities, with an aim to consider five to ten pilot projects that would tests theories, create pathways, and investigate others.  All of this will lead up to the completion of the Cultural Resources Climate Change Strategic Plan.

In partnership with the Scripps Institute and the Office of Historic Preservation, the goal of this one-year project is to evaluate and synthetize the existing vulnerability assessments, to identify the particular needs of our State and to develop a protocol to begin measuring the vulnerability of our local heritage to climate change impacts, with the goal of identifying a set of potential actions for mitigation. This project will contrast the Outstanding Universal Values used for World Heritage Sites, the criteria for inclusion in the National Register of Historic Places, and the definitions of value from community participants, to identify the significance of cultural heritage. The California Heritage Climate Vulnerability Assessment Tool is intended to be a fast assessment of local heritage to climate impacts, the long-term goal is to encourage others to tailor it to any particular sites’ needs. 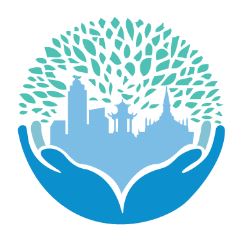 Mobilizing the cultural heritage and historic preservation sectors for climate action, the Climate Heritage Network is devoted to the role of cultural heritage and historic preservation-tangible and intangible-in climate action. Launched in October 2019, the Network provides a free, voluntary platform from which the cultural and heritage sectors can work together to tackle climate change. Heritage actors can help their communities achieve their climate targets and the ambitions of the Paris Agreement with an emphasis on integrated nature-culture approaches. Cultural heritage is both impacted by climate change and a source of resilience for communities. Cultural heritage-based solutions to climate change mitigation and adaptation offer enormous potential along with other forms of climate action. Nonetheless, there are literally thousands of historic preservation professionals and supporters whose heritage talents have not been mobilized on climate issues. This is so even in jurisdictions that have made ambitious climate action pledges. The aim of the Climate Heritage Network is to flip this paradigm. We invite you to join the Network and become a part of the solution!

View the video of the launch symposium. 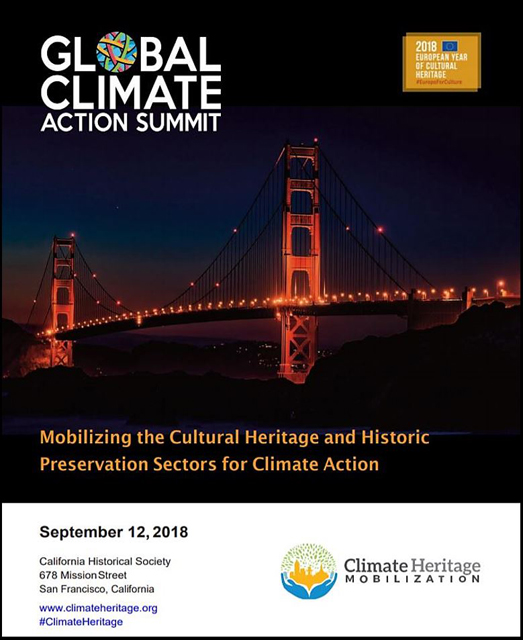 Climate Heritage Mobilization Event - Videos & Program
In September 2018, the Global Climate Action Summit was held at multiple venues throughout San Francisco, with various additional climate related events held around the city. The Office of Historic Preservation, along with national and international partners, facilitated an officially affiliated event, “Climate Heritage Mobilization.” The Mobilization event continued an already building conversation around the intersection of culture, preservation, and climate change. Links to videos and individual program sections of the event can be accessed through the Climate Heritage Mobilization Program.  To see the video of a section in its entirety, click on the blue-lined section title. For video of a specific speaker or moderator's comments, click on that individual's blue-lined name. Hear from some of the leading voices worldwide on the challenges concerning climate change and cultural heritage resources!

On June 10, 2022, the California Cultural Resources Climate Change Task Force hosted an online, interactive session in conjunction with the California Preservation Foundation Annual Conference. Session attendees were able to learn about the current work of the Task Force and share ideas and input on the next phase of Task Force climate actions and priorities.
View the session here.