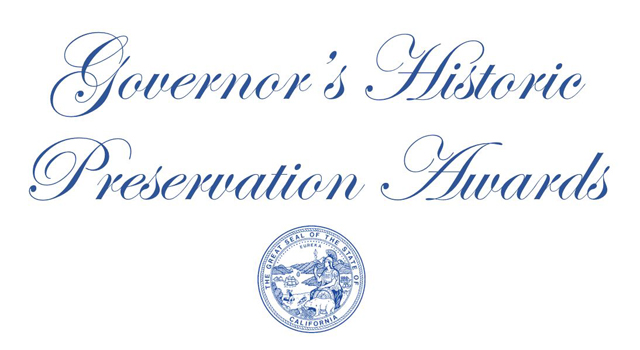 Established in 1986, the Governor's Historic Preservation Awards is California's only state-sponsored awards program and seeks to recognize community-centered, often grass-roots efforts going on throughout California to preserve our collective heritage. The awards are presented annually under the sponsorship of the California Office of Historic Preservation (OHP) and California State Parks to projects, individuals, and organizations whose contributions demonstrate outstanding achievements in historic preservation.

The nomination period for the 2022 Governor's Historic Preservation Awards is now closed. Thank you to all who submitted nominations! We look forward to announcing the award recipients later this year. In the meantime, we invite you to consider submitting a nomination for the 2023 awards. Nomination forms and instructions are now available and posted below.

Awards for the 2021 Governor's Historic Preservation Awards were presented at a ceremony on Wednesday, April 27, in Sacramento. Congratulations to all of the deserving recipients! You can view the ceremony video on our YouTube channel. To learn more about each of the awarded projects, click the links below:

The annual ceremony and reception honoring the Governor's Awards recipients is made possible each year through the generosity of our donors. Visit our Donors page for details about the 2021 donors:

Interested in being a donor for future awards ceremonies? Please contact: Jenan Saunders, Deputy SHPO, at jenan.saunders@parks.ca.gov, or (916) 445-7000.